Everything here on the Oregon coast in a storm comes in waves – the bands of heavy rain, the tantalizing blue sky before the next torrent, the  buffeting winds, the whipped white caps on Coos Bay here near Charleston,  and always the seabirds: the waves of surf scoters, waves of brants, waves of scaups, and mixed flocks of of waterfowl, the wigeons, grebes, buffleheads, goldeneyes, and loons. Even right over the house, the crows descend in waves of squawking and then fly off in a black whorl. The gulls have a way of washing in and out, too.

It takes coming to the sea to be reminded of the rhythmic forces of life – the force of this moon pulling the ocean and causing the twice daily high and low tides. And it takes a big classic Oregon  coastal March storm with crashing waves at Cape Arago and high winds to be jolted right into the middle of a grand symphony.

From the darkness of early morning now, I listen to the foghorn that comes at regular weeping intervals, a steady mournful sound  every few seconds as the rain pelts harder and the winds rise and the open sea so close beyond this bay rumbles.

Somewhere the seabirds are out there rocking in the wave troughs  with their heads tucked on their backs and their oiled feathers keeping them snug.  Underwater, the gray whales swim unperturbed, as do the sea lions and seals slipping deep into a mystical realm of kelp forests and fish, squid, jellyfish, and all I can only imagine.

Last week before I arrived, 5,000 gulls and a kaleidescope of seabirds descended upon this very bay for a feeding frenzy. Great schools of herring had come to spawn and lay their eggs, revealed at low tides as feasts of fine caviar for the birds.

Life here on the Oregon coast is never a steady trickle. It’s ever-changing.  Don’t be fooled by the weather forecast that simply predicts rain every day and lots of it. That’s true in terms of quantity, yet throughout the days, I’m  witnessing the great, gray storm clouds barreling in and between them the interludes of calm and even a gleam of sun that is far more intensely beautiful than any sun on a bluebird day, because this light is set against the bruised blue black colors of  towering gigantic clouds swooping toward you.

While I take shelter under a roof, and burrow under this cozy quilted blanket with a hot cup of coffee waiting for the dawn, the birds ride out the storm. They know nothing different. Even the rufous hummingbirds brave the rains. In the dark, they’re likely hunkered down on a sheltered perch and saving energy. By day, I’ve watched the wind flattening and ruffling  feathers as the stalwart little flyer beats its wings harder than ever to stay close to the purple bloom with its life-giving sweet nectar.

Always, I learn from birds and from the places they call home. This week? It’s all about embracing what comes, readying for the next wave, and testing out every thrilling aspect of this storm. Be out in the rain when it falls the hardest, the wind when it blows the strongest, and the sun when it shines even for a glimmering couple of minutes. Ride the waves. Ride life. Exult in the moment. 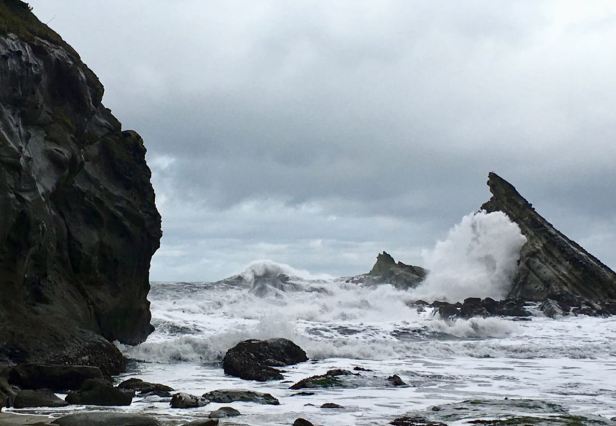 5 thoughts on “Riding the Storm like Waves of Seabirds”