The ancient ponderosa of the upper Imnaha River bears a ring of blue paint on the front and a number sprayed on the back: 58. It’s the mark of death by chainsaw. This is the biggest and most stunning of all the numbered and blue-painted pines–103 of them along a road corridor beloved for its magnificent pine and larch forests.

All 103 pines are slated to be cut any day in a fast-track logging travesty, ignoring a legal obligation to notify and involve the Greater Hells Canyon Council and Oregon Wild before going forward with plans that could involve cutting down trees.

For those of us who know the upper Imnaha River, we come for many reasons — to camp, picnic, hike, hunt, fish, birdwatch and revel below the great pines and larches of the West that have become a rarity in a logged landscape of second growth. We come for all these wild forests support–from the elk tracked by wolves that howl in moonlight to the goshawks nesting in a broken top of a ponderosa snag that has stood for decades after its death.

Is it a coincidence that I am 58 years old? The number keeps finding its way to personal significance. I was born in 1958. My marathon time this past June was 3:58. And now? Here it is. This magnificent, centuries-old tree bears that number. Can I save this tree, and all the others too? I’m sure going to give it a try. And I hope to honor its home within the Hells Canyon National Recreation Area of my beloved Northeast Oregon.

After burrowing my nose into the vanilla scented, furrowed bark of tree 58, I walked to the edge of the Imnaha River singing its wild salmon song below pines, larches and cottonwoods glowing ember orange and buttercup yellow.

Right away, a belted kingfisher called as if to say in every staccato phrase, “I am with you. You are with me.” I gave a silent thanks to this bird and the Imnaha River that I first met in the early 1980s. How can I return this gift? I’ll tell the world and we’ll raise our ringing cry in tune with the kingfisher, the wild currents, and the winds that sift a dazzle of larch needles into the crisp air.

It’s time for the Wallowa-Whitman National Forest  to stop logging our ancient pines of the upper Imnaha– the living, the dying, and the dead. It’s time for this agency to honor the strict protections of the Hells Canyon National Recreation Area Act that mandates a preservation priority for wildlife  across the entirety of the 1,020 square miles with the deepest gorge in North America at its heart.

This latest move is not the first, nor will it be the last unless we stand up. This is the third time in two years that I and others have called foul to the Wallowa Valley Ranger District (that oversees the Hells Canyon National Recreation Area) for logging in the upper Imnaha River corridor.

Each time the chainsaws fire up to log the Imnaha pines under the guise of hazard or disease, the integrity of the ecosystem frays. Each time, the public trust is violated. We are never asked, never consulted, and regularly dismissed.

When it comes to western pine beetles, I am familiarizing myself with the science and consulting experts. I do understand the premise of removing clusters of pines with this year’s beetles and preventing a hatch in the spring. However, it’s questionable in its efficacy over a large forest area and it’s a cut-it-down silviculture approach versus an ecological one.  I’m suspect of chasing the beetles around with a saw, never really eliminating them, and instead destroying the habitat for the first defenders in the forest–woodpeckers and predatory beetles.

What’s happening here on the upper Imnaha seems small compared to the massive scale attacks underway in the Trump administration, including legislation to allow clearcutting without laws on public lands.  Yet, I believe you have to start with one tree, or one bird, or one place you love that is under siege. Then you feel your pulse quicken, your resolve harden, and your passion ignite to do what needs to be done. That’s how we’re wired as human beings. I’m no different. We start with our favorite place we know and then take it to the next level to stand up for the entirety of our public lands under assault.

I’ll start my action with tree “58” that  should never be defaced with a blue ring and a number like a criminal.

This pine knows its own name along with the wisdom of its long life. Listen long enough and I might come to know it–even as in death it continues to preside for decades within a living, breathing forest, the kind so eloquently documented in the book I’ve now read and marvel at always: the Hidden Life of Trees.

These are OUR public lands and we must have a say in their future. We will not be left out. We will not be silent.  Below are two ways to help,. You can scroll down for more photos of other marked trees of the 103 condemned to the saw.. 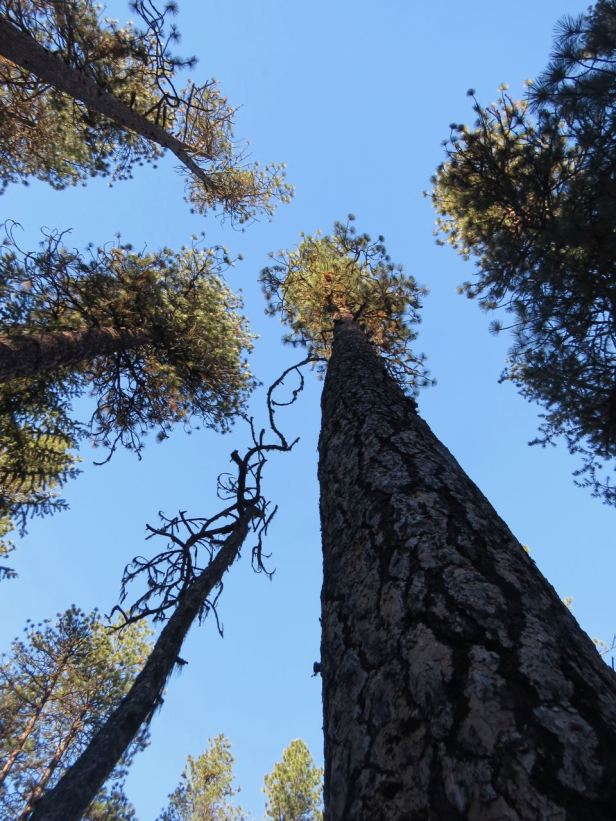 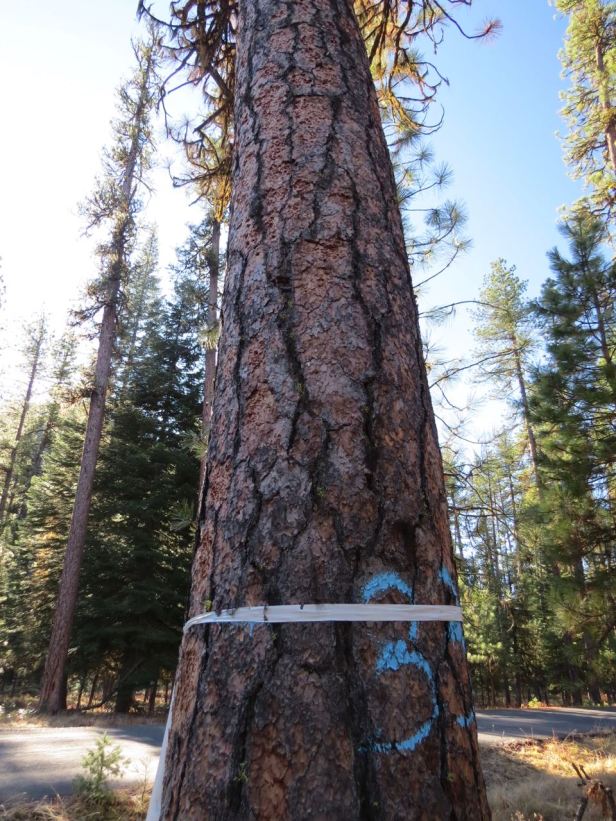