Two kingfishers in flight weave the frayed fabric of the sky, repairing, restoring, and painting their favorite shades of blue. For seven days and seven nights before and after the winter solstice, we might celebrate the gift of kingfishers that bring the halcyon days, even in the roughest, coldest, and darkest of times.

Winter is the time of story-telling, and as the winter solstice on December 21st approaches, I wake thinking of the ancient Greek myth of Halcyon and Ceyx, and how it resonates now. Solstice originates from the Latin sol (sun) and sistere  (to stand still).  We hold our collective breath, stay rooted, find the calm that is halcyon, and cherish the precious sunlight and honor the night. Our slow exhalations steam the chilled winter air. We breathe and feel the earth’s breath too. The kingfisher spreads its wings wide and becomes the moon in the dark sky and we feel its feathery warm embrace in the dark.

The moon on this solstice is a a waxing crescent, a sliver of promise in the longest night.  Here, in Oregon the sun will rise at 7:37 am and set at 4:30 pm, just under nine hours of daylight compared to summer solstice with an unimaginable six and a half more hours of light. In cold climates, we cozy up by fires, drink in the cheer of twinkling lights, inhale the pungent, resinous fir boughs and Christmas trees, taste hot cocoa, sing carols, feed birds, rejoice, and some of us face sorrow and the grief of loss, too.  Perhaps in the myth of Halcyon and Ceyx, there’s a gift for tears in the darkness, too.

This is how I retell the ancient Greek myth that you can also read in the poetic verse of Ovid in his book, Metamorphoses (highly recommended winter nights’ reading):

Halcyon, daughter of Aeolus, God of the Winds, fell in love with Ceyx, son of Eosphorus (Lucifer), the Morning Star. Their love was beautiful, the kind that is rare in the world, the love that is of soul, spirit and bodies so perfectly entwined. They had eyes only for each other. They married and lived in harmony in the way that Ceyx reigned the kingdom of Trachis.

But all was not well. Ceyx had a brother named Daedalion who was as warlike as Ceyx was peaceful, except when it came to his daughter Chione, who he adored. For Daedalion life dealt a crueler fate in sharp contrast to Ceyx’s joy.

Chione’s ravishing beauty captured the attention of both the gods Apollo and Mercury. After she bore twins, one from each god, Chione boasted that her stature rose higher than Artemis, goddess of the hunt and the sister of Apollo. Infuriated by this act of hubris, Artemis killed Chione. The bereft Daedalion threw himself from the cliff of Parnassus, and as he fell Apollo intervened. Daedalion’s arms became wings, his nose a hooked bill, and his toes curved into sharp talons. Once fierce as a human, he flew as the predatory hawk.

When Ceyx learned all that happened to Chione and to his brother Daedalion, he grieved and then grew fearful. The tragic loss of Chione and his brother’s fate could well portend trouble for his nearby tranquil kingdom. Ceyx approached Halcyon, gently telling her he must consult the Oracle of Apollo at Delphi and go by sea, since the overland path was then impassable. Halcyon warned him of the dangers of turbulent winds, which she knew well from her father Aeolus.

“Take me with you,” she said as they held each other close. “Together, we will face the danger of the storm.”

Ceyx listened and his love burned strong. For the two of them, any absence seemed too long. Yet, he told her he must go alone with his crew, while she remained safe on shore. He would hurry and be home before two full moons had passed. They kissed and their bodies melted into one another as the waves broke on the sea.

Halcyon watched the ship set sail. Her tears flowed as her lonely vigil began. Her waist-long, curly auburn hair blew in the salty wind as she walked the shore, as she would each day in his absence. Her flowing turquoise dress rippled with the colors of the Aegean Sea. Each day, she cast off slippers and ran barefoot, splashing in the foam. Once, she saw a kingfisher hover above the ocean. She held her breath as the dazzling blue and green tiny bird paused in mid-flight, as her own life felt on hold while the love of her life sailed far away.

Ceyx and his crew sailed easily halfway across the sea toward their destination. It was then as night fell that the whitecaps broke on waves. A southeaster wind began to blow and a breeze became a gale, until the sea churned in a fury of waves.

The captain called out to furl the sails, but the violence of the storm swallowed his words. The ship rose high upon the towering summits of waves, then crashed  into the depths. Rains poured. Thunder boomed. Lightning struck. Towering waves surged into the vessel until the crew wept and called out for their families. Ceyx had only one word on his lips, “Halcyon.”

Without warning, an immense wave broke upon the ship, shattering the rudder and the mast. The splintered boat sank into the depths of the sea. Ceyx, one of the few torn from the ship instead of trapped upon it, clung to a plank and spoke Halcyon’s name one last time as a black wave swept down on him. When the dawn lifted the gloom of darkness, the Morning Star dimmed in grief.

Meanwhile, Halcyon kept her vigil on the shore and prayed at the shrine of the Goddess Hera that Ceyx might return home safe to her. The powerful goddess Hera, wife of Zeus, listened to Halcyon’s entreaties, yet even she could not change his fate. She could only tell her the truth that Halcyon’s beloved husband had drowned and honor Ceyx’s wish that he would return to her.

Hera sent her messenger Iris, goddess of the Rainbow, to the cave of Somnus, god of Sleep. The shimmering Iris woke Somnus to ask if he would command Morpheus to take the shape of Ceyx and appear in a dream to Halcyon. Somnus lived with his three shape-shifting sons. Icelos represented four-legged creatures, birds and snakes. Phantasos mimicked soil, rocks, waves and trees. Only Morpheus could take the form and even copy the pattern of speech and movement of humans. Somnus agreed. Iris retreated before she, too, might succumb to the somnolent cave of deep dreaming. Morpheus then flew to the bed chamber of Halcyon, who woke to the specter of her Ceyx, dripping wet and deadly pale. She cried out when she saw him, as he told her with tenderness and tears that he had drowned.

Queen Halcyon ran to the sea, tears streaming down her face, wild with grief.  Hera and Zeus in their pity had assured that the body of Ceyx would wash up on shore where Halcyon could at least hold her king in her arms. When she saw the body of Ceyx approaching her on the incoming waves, she climbed up on a rock jetty and leaped to join him in death. 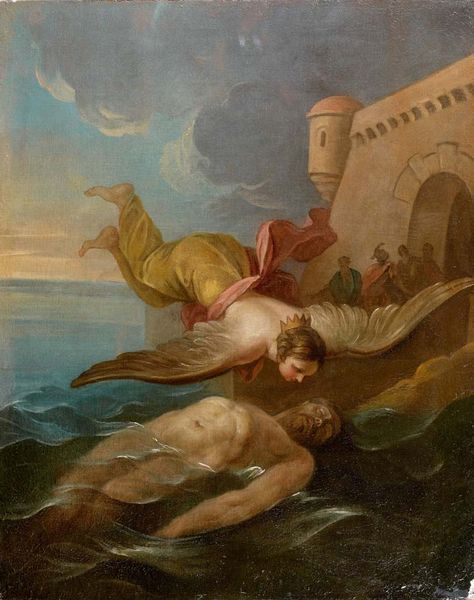 Each year, they nest upon the sea over winter solstice, when Aeolus, father of Halcyon, lulls the seas to rest for seven days before and seven days after the solstice, the time when the kingfishers brood their young upon the waters. Sailors would come to call those calm days in winter’s fury the “halcyon days.”

Note–thanks to Charles Wheeler, photographer–with gratitude to him for his generosity of sharing his spectacular images of Belted Kingfishers with so many people..a couple more to end on a smile…