When I was a child, I discovered naturalist Sally Carrighar’s books, including One Day at Teton Marsh, published in 1947. Through her words, I entered one day from the perspective of a beaver, a trout, an osprey, and an otter. I could pretend to groom my furry otter self and slide down slick mud into cool waters.

Last week, high in the Tetons camping near a subalpine lake swirling in the flutters and calls of Clark’s Nutcrackers harvesting whitebark pine seeds, I remembered that book and the same desire. This time, I wanted feathers, flight, and a gutsy spirit. To pay homage to Sally, I choose the nutcracker on one late August day in the Jedediah Smith Wilderness.

Kraaaack! Kraaaaw!  Startled from her chiseling of a whitebark pine cone in a treetop, the female Clark’s Nutcracker cocks her head, alert to the alarm call. Like gray, black and white ghosts, ten nutcrackers stream toward a skeletal dead pine. She lifts to join them, her feathers whooshing the air. Her flight undulates as she flaps hard, then holds her wings tucked close, and strokes the air again.

She lands three branches down, joining the cacophony of nutcracker taunts. Their subject? A lone Cooper’s Hawk perches on the highest limb. Sleek and gray with a pale reddish barred chest and long banded tail, the crow-sized hawk is not much bigger than the nutcrackers. And yet? This is an accipiter, a predator of birds, and the nutcrackers intend to drive him away.

The female hears her mate squalling above her, perilously close to the hawk. The raptor lunges–wings open and sharp talons ready to grasp him. Eruption! Birds scatter in every direction. She’s plying her wings and streaking away. Safe. Every bird accounted for. The hawk circles above the subalpine lake cradled below the Teton crest.

The nutcrackers return to the task of gathering and caching seeds. Below, four humans with a black dog are busy, too. The female bird investigates with a grating kraaah? The dog leaps into the lake. The two-legged ones struggle out of backpacks. She suspects they will camp for the night. From past experience, she knows their food will be unappetizing–far less palatable than the oily, rich, lovely pine seeds so abundant this year. 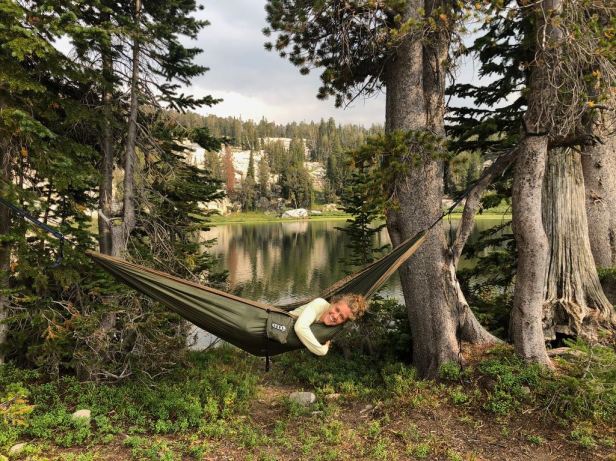 The cones are ready. The days are shortening. As she flies up to a purple, gleaming, sugary, and sealed delight, she notes the familiar mew and meerk calls of her two offspring in a nearby tree, joining a mob of youngsters. After she and her mate have fed them seeds for over a month, the fledglings are getting the hang of nutcracker life.

It goes like this. Don’t just probe or peck. Attack a cone with a sharp chisel bill. Shred, stab, and pound the scales. Hollow out the pulpy middle. Expose the seeds with their hard sealed coats. Eat one for sustenance. Crush hard to remove the kernel and then swallow. Don’t worry about a few shell fragments. Those are helpful for grinding food in the stomach.

Then, turn to the harvest. Pluck out a seed in one deft swipe. Test the encased seed first with bill clicking and weighing to make sure it’s not empty. Place it under the tongue and with a head toss backward, force the seed down into a sublingual pouch that expands nicely to hold 80 or so tasty treats. Repeat. Speed up. After three years, this nutcracker is nimble and quick. She often collects 30 seeds per minute. 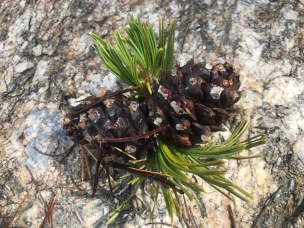 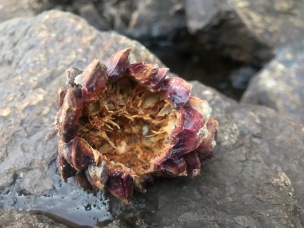 After loading up a full pouch, the Clark’s Nutcracker hides the seeds. She will return to dig them up later in fall, in winter, spring, and even next summer to feed another brood.  The seeds that remain in the soil will sprout. Without nutcrackers, there would be no whitebark pines–so dependent are the trees with wingless seeds on the avian planters.

Her memory is unparalleled. Flying off with her heavy pouch, she chooses each site with care, whether a crack or hole in a tree, a decaying log,  gravelly soil, or needle-strewn duff. How will she find the cache, even in snow? She notes a defining boulder to her right and a fallen tree to her left and triangulates to pinpoint the spot.

When she returns months later, she will remember the features and the angles to lead her to the cache. This time, she chooses five seeds from the pouch, removing one at a time with a head toss. She digs a tiny trench in the soil with sideways swipes of her beak,  pushes the seeds into place, and covers them up. Everywhere around her, nutcrackers are pressing seeds into cracks and holes of trees, in decaying logs, and in soil. Before flying to the next stop, she stores yet another map in her keen brain. She will plant and remember the locations of as many as 100,000 seeds.

To stretch her wings and catch the brisk wind, she and her companionable mate whisk off and over the saddle to cache a few miles away. On their return, they meet a dozen other nutcrackers and can’t resist a bit of aerial cavorting. 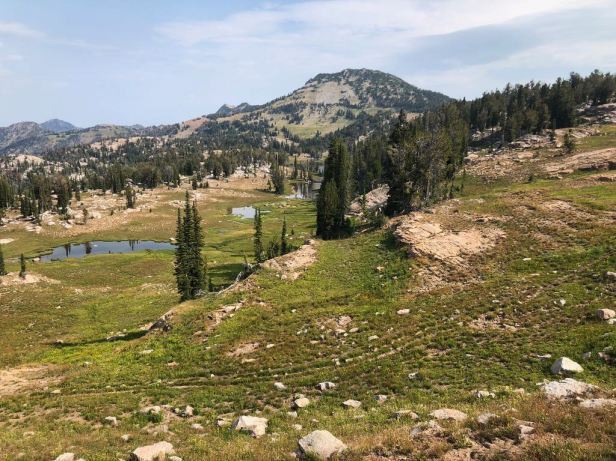 Then, it’s back to work in the late afternoon until interrupted by the crack of lightning and rumble of thunder echoing around the alpine cirque. Rain patters and then crescendos to a rat-a-tat-a-tat drumming. The two-leggeds run for their tents. The dog piles in, too. A pair of ravens tumble and play high in the gusts. This is their moment, the kings and queens of the cumulonimbus.

The female nutcracker flees to the safety of her flock sheltering on branches of whitebark pines that nudge shoulder to shoulder–just the way they were planted centuries ago by her ancestors. The cycle continues in the wilderness shaped by the symphony of pines and nutcrackers. Day becomes dusk. The storm recedes. Bats swoop after insects. The waxing half-moon glows. 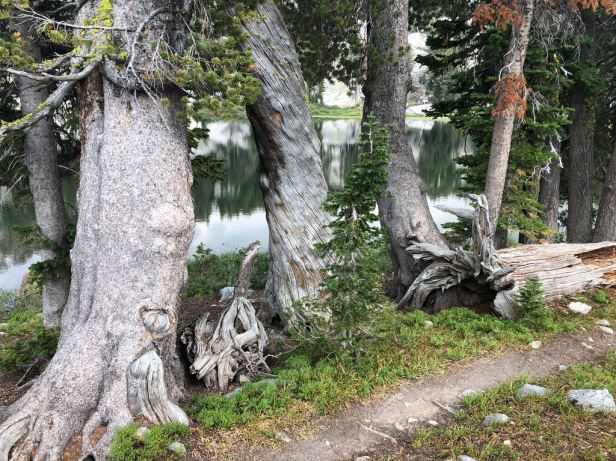 To learn more about the reciprocity of Clark’s Nutcrackers and our threatened whitebark pines, and of the pine as a keystone species that is fundamental to grizzly bears, red squirrels, and to the shading of subalpine firs, and even as holders of the headwaters, you might want to check out the following sources.

BOOK:  Made for Each Other, A Symbiosis of Birds and Pines, By Ronald M. Lanner (a highly engaging book filled with scientific wonder).

Note: Photo of Cooper’s Hawk is from Cornell Lab of Ornithology. All other photos without attribution are by Marina Richie.

7 thoughts on “One Day At Nutcracker Lake”